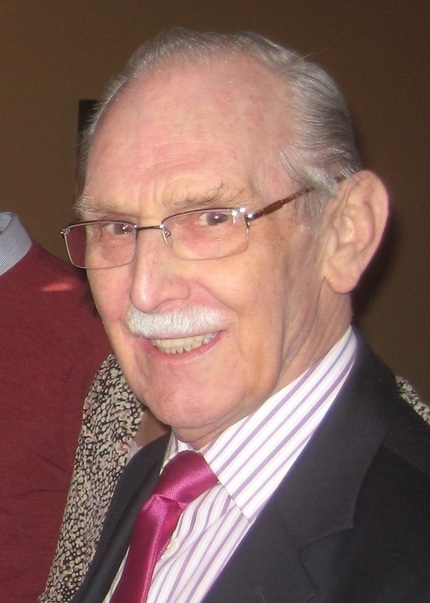 Bill Jackson was a member of AJS&MOC for many years and a regular presence at our events. He had a way of making his presence felt without being overpowering. His sense of humour frequently had his friends in fits of laughter. Always immaculately turned out, Bill’s dress sense was very sharp and was always admired.
Bill started work as an instrument technician in the RAF before leaving to make his way in the wider world. He then worked at Harrods, as a watch and clock maker, where he met Betty who was to become his wife of fifty-nine years. Although he left horology for a more demanding profession in finance he retained his love of timepieces and was an enthusiastic member of the British Horological Institute until his death.
A skilled rider and driver, Bill was an Institute of Advanced Motorists instructor for both bikes and cars. He was always keen to encourage others and was a welcoming voice to new or prospective members of his hobbies.
Bill passed away, aged 82 years, after a long illness which he suffered in his typical stoic manner. A unique character who stood out in Heart of England, Bill will be greatly missed by many. Our thoughts are with his wife.

Bill was a gentleman of the old school, genuinely considerate, kind, polite and intelligent.  I first met him fifteen years ago when I joined the AJS & Matchless Motorcycle Owners Club. He had already been a member for many years and was one of the first to speak to me. He had just broken a fingernail and his first ever words to me were “I don’t suppose you’ve got a file, young man”? He meant it as a joke but I surprised him by saying “Yes, I have actually, would you like to borrow it”? In his inimitable way he said “I will if it IS a file, I don’t want a rasp”. We both laughed and I knew straightaway I would get on well with him. He was direct and said what he thought but in a jovial manner. It was impossible not to like him.
He always mucked in with us but you couldn’t miss Bill at our get-togethers. He was never anything but immaculately turned out. He would usually be wearing a striking shirt with a tie, while most of us were, erm, dressed like motorcyclists. He was a constant at our events and had a way of making his presence felt without being overpowering. His sense of humour frequently had us in fits of laughter. He was keen to be involved in the club’s activities, game for anything and joined in all our silly amusements in the best spirit. Many of us have fond memories of him at one of our ‘Ladies Nights’ wearing a pink Father Christmas hat with great aplomb! He was adventurous too; always eager to try new things. One of our ladies brought some bath bombs into a meeting. Bill had never heard of them but took one home to try it! He was always at the annual dinner and like all our events enhanced it by being there.
He was a very clever man. He was originally a clock and watch maker and passed some of that knowledge to us by giving us talks on how to repair a chronometric speedometer. I think it was all a little too complicated for us but we were pleased that he felt we were worth instructing. Horology was not his only expert field, he was also knowledgeable on Tamla Motown and through this often saved his team in our music quizzes.
Bill rode with us for many years but there comes a time in most motorcyclist’s life when starting an old bike, i.e. with a kickstart, becomes a little difficult and they join the ranks of the ‘electric starter brigade’. Push a button and off you go. That is understandable. However, most aging bikers at this time also trade down to a nice lightweight motorcycle, a little Honda, say, easy to push around and handle. That wasn’t Bill’s style! In life Bill seemed to adhere to the maxim ‘Biggest or most expensive is best’ and he surprised us all by turning up on his new bike. The biggest BMW motorcycle one could buy. It was a speed monster!
It is fair to say that Bill rode his new road rocket well. He became an instructor for the Institute of Advanced Motorists, for both bikes and cars. And, he wasn’t slow to tell us if we could sharpen up our riding skills. Clearly I am not going to mention any names here, because I don’t want to embarrass Conway, but I used to make sure I kept behind Bill so he couldn’t see how badly I was riding! Eventually even this bike proved a bit too much of a handful for him. It tipped over once and it took three of us to pick it up again! So that was traded in for another BMW, this time a car. Bill being Bill it was of course top of the range and the fastest they made. I doubt that he ever got out of first gear following us around on our old crocks! However we were just very pleased that despite no longer officially being a ‘biker’ he still wanted to come along to our meetings.
Bill was a very popular member of our group; a real gentleman and a thoroughly nice chap. He was always keen to encourage others and always a welcoming voice. He will leave a big hole in our club. We loved having him around and he will be sadly missed by us all.